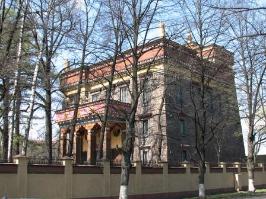 During the one hundred years of its existence, Datsan Gunzechoinei has become a significant place for all Russian Buddhists and an important cultural center of the multiconfessional city. Datsan Gunzechoinei (Gunzechoinei – Tibetan: 'The Source of the Holy Teaching of the Buddha, Compassionate to All Beings’) in St Petersburg was built in 1909-1915 after the project by N. Berezovskiy and architect G. Baranovskiy, who had used the Tibetan Tsogchen Dugan temple as an example. Construction started upon the initiative of the emissary of the thirteenth Dalai Lama, the learned lama Agvan Lobsan Dorzhiev (1853/54-1938). The temple was consecrated on 10 August 1915 (Old Style).
During the Civil War of 1919 the temple was vandalized and lost most of its relics. Between 1922 and 1937 the temple grounds belonged to the Tibeto-Mongolian Mission in the USSR. In 1938, the building was municipalized after the elimination of the mission; all religious relics were donated to the Museum of Religion and Atheism. Later on the building housed various organisations.

Only in 1990 was the building returned to the Leningrad Buddhist community and the temple was restored and revived.

Over 230 objects from the major St Petersburg museums and private collections tell about Buddhism in Russia and St Petersburg, allowing the visitors to experience the world of the Buddhist religious tradition.

At the exhibition lamas from tantric Datsan Kalachakra (Ulan Ude, Buryatia) will construct a mandala which illustrates the two dimensional representation of the divine palace of Avalokiteshvara, the Bodhisattva of compassion. After being finished, the mandala will become part of the exhibition.

Almost all deities have their mandalas, but Avalokiteshvara’s divine palace was chosen for the Peter and Paul Fortress, which had seen anguish and grief, because Avalokiteshvara is the Bodhisattva of compassion. It is believed that a deity descends to earth and stays here from the moment the lamas begin to build mandala, inviting Avalokiteshvara to visit his palace, until the moment the mandala is taken apart.

Before closing the exhibition, lamas from St Petersburg datsan will dismantle the mandala; one part of the sand from the mandala will be offered to water deities and the rest of it will be handed out to all believers.