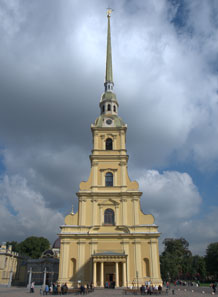 Peter and Paul Cathedral is justly regarded one of the main attractions of Peter and Paul Fortress. It was built in 1712–1733 as the main cathedral of St Petersburg, new capital of the Russian Empire. Designed in Baroque style by Dominico Trezzini, it combines typical features of West-European and Italian church architecture. It is rectangular in shape, with the dome on the eastern end and a belfry with a 402 feet high spire on the western entrance.

The interior decoration of the Cathedral is foreign for the Russian religious architecture tradition as well. Peter and Paul Cathedral is a hall church, with nave and side aisles of approximately equal height, united under a single immense roof. The space of the cathedral is divided in three parts by pillars, painted to imitate marble. The vaults of the cathedral are decorated with multicolored fresco paintings and gilded moldings. The cathedral is lit though twelve large windows. It became one of the first cathedrals in Russia, decorated with paintings, along with the icons. It was by no means the influence of the European tradition.

Artists will appreciate the wooden gilded Baroque iconostasis, designed by Ivan Zarudny and carved by Moscow craftsmen in the 1720s. The iconostasis contains 43 original icons of the eighteenth century. The central part of the iconostasis is designed in the form of the triumphal arch that spans the Royal Doors and rises into the space beneath the dome to a height of almost twenty meters. Near the iconostasis are a pulpit to the left, and the Tsar's Place to the right, a special spot where the emperor stood when there was a service.

Peter and Paul Cathedral is the symbolic center of Russia because it is the burial place of many of the imperial family. For two hundred years all Russian rulers from Peter I to Nicolas II (except Peter II and Ivan VI) and their families were buried here. The locations of the graves are marked by sarcophagi made of white Carrara marble. The lids of the tombs are decorated with large bronze cross coated in pure gold, tombs of the rulers have four bronze emblems of the Russian Empire at four corners. Sarcophagi of Emperor Alexander II and his wife Maria Alexandrovna were replaced by those made of green Altai jasper and pink Urals rhodonite in 1906. The remains of the last Russian Emperor Nicolas II and members of his family, who were shot under the town of Ekaterinburg by local Bolsheviks on 17 July 1918, were buried in the Catherine’s Chapel of Peter and Paul Cathedral on 17 July 1998.

In 1908 Grand Ducal Burial Chapel, designed by David Grimm, Anton Tomishko and Leonty Benois, was added to the cathedral as a burial place for Grand Dukes and Duchesses. From 1908 to 1915 thirteen persons were interred there, eight burials were transferred from Peter and Paul Cathedral. In 1992 great-grandson of Alexander II Vladimir Kirillovich Romanov was buried in the Chapel, which opened a new page in the history of the burials in the Peter and Paul Fortress. In 1995 the remains of his parents were transferred here. On June 3, 2010 his wife Leonida Georgievna Romanova, nee Bagration-Mukhranskaya, was laid to rest here.