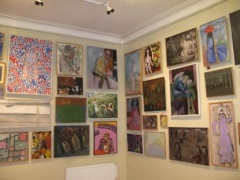 Years of the “Thaw” of the late 1950s - early 1960s were marked by unprecedented creative enthusiasm in different spheres of life, including fine arts. It is no coincidence that this period in the artistic life of the country is often called the “second Russian avant-garde”.

Many artistic schools and unions were organized in Leningrad of the 1960-1970s, such as Alexander Arefiev’s circle, school of Vladimir Sterligov, school of Osip Sidilin, Mikhail Shemiakin’s group “Leningrad”, Pavel Kondratiev’s circle and others. Exhibitions of underground art opened one after another.

The exhibition at the Rumyantsev Mansion presents works by Leningrad nonconformist artists of the 1960-1990s. These are Alexander Arefiev, Anatoly Basin, Anatoly Belkin, Gleb Bogomolov, Richard Vasmi, Mikhail Shemyakin and others.

The exhibition is complemented with photographs by Gennady Prihodko, showing the events of the artistic life of the city of the 1970s.