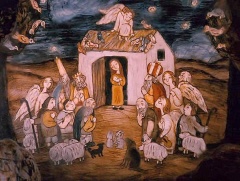 The exhibition at the Rumyantsev Mansion presents works by a well-known Russian animation director and artist Mikhail Aldashin.

Mikhail Aldashin was born in 1958 in the town of Tuapse, Krasnodar Krai. In 1987 he graduated fr om VGIK (The Russian State University of Cinematography) as a life-action film art director. In 1989 he finished scriptwriting and film making course, where he studied under supervision of Yuriy Norshtein, Eduard Nazarov and Andrey Khrzhanovsky. The first film he participated in as an animator was Kele (1988, Soyuzmultfilm studio). From 1989 to 2077 he was employed at the Moscow animation studio Pilot, wh he directed a number of animated films, among which The Nativity (1996) and Bugs (2002) have received international recognition. Mikhail Aldashin teaches art direction at the Animation School and Studio (SHAR Studio).

The exhibition at the Rumyantsev Mansion includes more than 60 paintings by Mikhail Aldashin, created between 1991 and 2011. Among them are Tuapse views, still lifes, paintings of dogs and birds. From the first sight might seem to be simple and naïve, Mikhail Aldashin’s paintings are filled with a special positive and kind energy. On view are sketches, portrait studies, drawings made by Aldashin in his notebooks, as well as series of children’s “pictures for reading”. Special section of the display is dedicated to The Nativity animation film. On display are sketches and decorations, made and annotated by the author. The Nativity, along with the other animated films by Mikhail Aldashin (Bugs, The Other Side, Kele, About Ivan the Fool) will be screened at the exhibition.