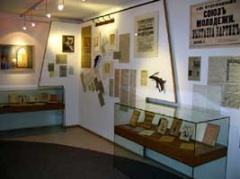 Permanent display in the Mikhail Matyushin’s House focuses on the main stages of the development of avant-garde culture in Russia and shows the diversity of St. Petersburg avant-garde art of the 1920s – 1930s. On display are memorabilia of the Matyushin’s family, paintings and drawings by Mikhail Matiushin, Elena Guro, Alexey Remizov, Nikolay Kulbin, Vladimir Sterligov and followers of Kazimir Malevich and Pavel Filonov; books, manifestos, brochures, photographs and other unique materials, connected with the history and the evolution of the avant-garde movement in Russia.

The display consists of two sections: the first one is dedicated to avant-garde before and after 1917, and the second – memorial part – includes the reconstructed studio of Mikhail Matyushin and the room of Elena Guro.

St. Petersburg avant-garde originates from 1908, when artists of the “Triangle” group had taken part in the “Modern Trends in Art” exhibition. The “Triangle” group united future avant-garde leaders: Mikhail Matiushin, Elena Guro, Alexey Kruchenykh, Vassily Kamensky, David, Nikolay and Vladimir Burliuks. Later they became members of the “Union of the Youth” artistic group. In 1913 the “Union of the Youth” merged with group “Giley”. Interests of the avant-garde activists lay in every field of art: painting, literature, theater, music. The exhibition features documents concerning the activity of the “Union of the Youth”, the “Giley” literary group and the “Zhuravl” (“Crane”) publishing house, founded by Matyushin, as well as materials about the staging of the opera “Victory over the Sun” and the play “Vladimir Mayakovsky”.

In the 1920s avant-garde artists became more concerned of the problems of art theories. To give artists a possibility to research into these problems, State Institute of Artistic Culture (GINHUK) was founded in 1923. Kazimir Malevich, Pavel Filonov and Mikhail Matyushin led their classes there. They opened groups of their followers and disciples, which was typical of the artistic life of St. Petersburg in the 1920s – 1930s. Items, connected with the activity of GINHUK, are shown at the display in the Museum of St. Petersburg Avant-garde.