From Weekdays to Holidays – Urban Sketches from the 1930s 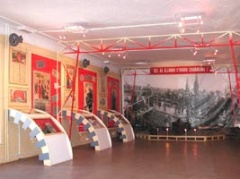 The 1930s in Russia was the time of five-year plans, true enthusiasm in work and fundamental reorganisation of the Leningrad industrial basis. The exhibition features samples of goods, produced at the city enterprises, and models of different structures and devices.

The process of rapid industrialization involved intensification of labour and restriction of discipline. The country budget was refilled by means of currency issue, loan of money from the citizens, sale of alcohol, price increase. Card system of food distribution was involved in Russia in 1929 – 1935. Cards and coupons for different social groups of citizens, passes to special food distribution centres are on display.

According to the order of the Central Committee of the Communist Party (1831), the decision was made to turn Leningrad into an “ideal socialistic city”. Soviet propaganda was actively creating an image of a prosperous citizen. Jewelry, cosmetics, permanent wave and manicure came into fashion. Numerous hairdressing salons, tailoring shops and specialized supermarkets started to open.

Everyday life of citizens changed as well: the celebration of the New Year was resumed, recreation and entertainment parks appeared, sport and a healthy way of life were promoted. Demonstrations and parades became important parts of the city holidays. For these occasions the city was specially decorated.

The exhibition aims at showing different aspects of life in Leningrad of the 1930s. On display are sketches for the decoration of Leningrad’s streets and squares, photographs, dresses and authentic household items evoke the atmosphere of that time.